I recently read this provocative quote by Richard Rohr:
“In our strange configuration of life that we have today, all you have to do is prove that you are the victim and you immediately have the moral high ground. You are almost untouchable. It is a strange way of getting moral high ground without doing any kind of moral development whatsoever. You do not have to grow up. You do not have to let go. You do not have to forgive. You do not have to surrender. You just have to accuse somebody else. Somehow, to prove that somebody else is down makes you feel up. To prove that somebody else is a sinner gives you the strange experience, obviously not true, that you are a saint. To prove that someone else is wrong or has hurt you makes you right. This is in the blood of North America now. I do not know where it came from, but it is clearly a distortion of the message of the Cross.”
What is the message of the cross? The message of the cross is love. And love compels and nurtures sanctification, referred to as “moral development” in Rohr’s quotation. The cross pours enough love upon each of us that we can love ourselves and others from the overflow. Loving ourselves and others means that rather than living into an identity of “victim,” which we may have earned through terrible wounds from others, or we may have believed because other people named us this, we can live into a new identity and write a new story with God as our co-Author. We get to leave behind our old selves and our ways of relating, including using our hurt as a weapon to blame, attack, or entrap others. At the cross Jesus became sin so that we might be set free. Free to love, create, give, explore, and grow in faith and compassion.
In a recent coaching session with Michael Warden, our staff team learned about the “drama triangle,” which looks like this:

In the drama triangle, an individual who believes him/herself to be a “victim” will attempt to make others either the persecutor or the rescuer in their story.
One problem with the victim triangle is that it leaves the individual stuck in an identity that is so much less joyful and impactful than what God intends. A different option can be illustrated through the “empowerment triangle.” In the empowerment triangle, an individual begins to own their own story by asking, “What do I want to create?” Rather than focusing on the painful past or present, the person seeks a desirable outcome that is guided by love for self and others. In this model, the person refuses to abdicate their own responsibility and identity, even as they accept influence from challengers and coaches. 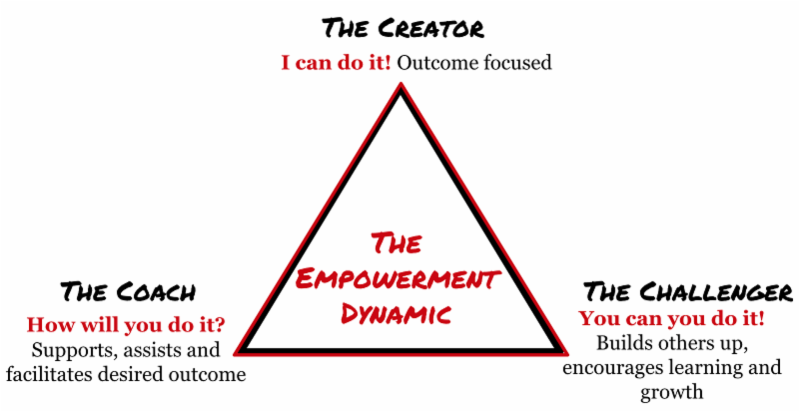 Author Henri Nouwen said this, “How can someone ever trust in the existence of an unconditional divine love when most, if not all, of what he or she has experienced is the opposite of love – fear, hatred, violence, and abuse?…They are not condemned to be victims! There remains within them, hidden as it may seem, the possibility to choose love. Many people who have suffered the most horrendous rejections and been subject to the most cruel torture are able to choose love. By choosing love they become witnesses not only to enormous human resiliency but also to the divine love that transcends all human loves. Those who choose, even on a small scale, to love in the midst of hatred and fear are the people who offer true hope to our world.”
Learning to reframe our perspective and our ways of relating to others is a process requiring much grace! But the more we meditate on Christ’s love for us, the more strengthened we become to shift from a victim to a creator in our circumstances and relationships. In this way, we will more fully honor Christ, whose love sets us free to resist participation in the victim culture so prevalent in our country.
*If these concepts of the drama and empowerment triangles intrigue you, you can read more in The Power of TED (The Empowerment Dynamic), by David Emerald, or visit Power of TED* | TED* Videos – Escape the Drama Triangle with TED* (*The Empowerment Dynamic) to watch video links.